Allegedly used in the early days with Curtis Knight, circa 1966. It is worth noting here that although some argue that an amp resembling a Supro Thunderbolt was seen on stage behind Jimi on at least one photo, it is very questionable if this actually holds any credibility. The whole theory seemed to have originated from someone’s statement, and then people tried retrospectively finding something that would resemble a Thunderbolt amp on a photo of Jimi.

The problem with this theory, mainly, is that the amp that is on the left edge of the photo below, the one that Jimi’s guitar was likely plugged in and that one that people argue is a Supro amp, has metal corner guards, and controls on the front. Supro Thunderbolt is a very bland looking amp with no metal guards and controls located at the top. The amp on the photo below is more likely a Fender combo. 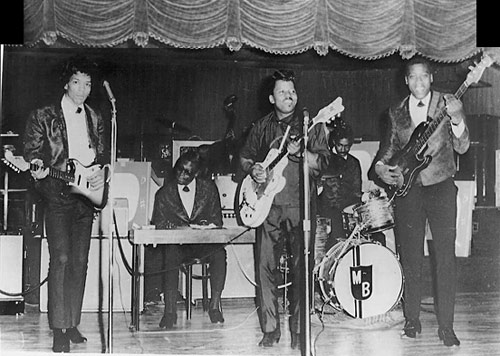 Jimi Hendrix with Curtis Knight and The Squiers. Some argue that he’s using the amp behind him on the left that seems to resemble a Supro Thunderbolt. Photo supplied by a visitor.

GroundGuitar Counts on Your Criticism and Feedback

In case you want to talk to me directly (piece of gear is missing, sending photos, etc.), please use the mail_outline Contact Form and I will get back to you as soon as possible. (Dan)

Allegedly, Jimi first came across a Marshall amp, and tried one himself, while sitting in with Brian Auger’s band Trinity – most likely on September 28, 1966. According to Brian Auger, Jimi turned the amp all the way to 10 and instructed the band to follow him while he played “Hey Joe” – of course leaving everybody in the room (apparently including even Eric Clapton) completely stunned. [11-12-13 Brian Auger Talks of […]

Sometime in early 1968, Hendrix signed an endorsement deal with Sunn amp. Allegedly, he was approached with this idea by Buck Munger (PR, Sunn Amps.) sometime after Monterey Pop Festival. I went backstage (Monterey Pop Festival), and by the end of the night I knew what record label he was on. Someone invited me, I think it was Chas Chandler, to a gig in Los Angeles to come and see Jimi, and talk about equipment. So […]

Jimi was seen using this amp in the pre-Experience days. More precisely, photos dating to his Curtis Knight days (late 1965/most of 1966) all seem to show Jimi playing through a Twin Reverb combo amp. Given that he played the last gig with Curtis in August 1966, and left for the UK in September, it is likely that the amp was either sold prior to the UK trip, or it […]

It seems that for a short period of time, around early 1968, Jimi used a few Fender Dual Showman amps for his live gigs. The amps were seen during the show at Fillmore East on February 1, 1968, on the 2nd at Winterland Ballroom, San Francisco, and lastly at Anaheim Convention Center, Anaheim on February 9, 1968. According to some sources, the amps were supplied by Fender for Jimi to use during […]

According to Roger Mayer (with whom one of our visitor’s had the chance to talk – see comments below), Jimi used a 1967 Sound City 100 Master Volume amp extensively on the Axis album. On Tour Jimi used a single Sound City One Hundred amp (likely the same one from the Axis session) briefly during the latter part of the 1968 North American tour, from around mid-March to April/May (see Miami […]

Hendrix allegedly used this amp during his endorsement deal with Sunn circa 1968. One of these amps recently appeared on an auction over at Reverb.com, paired with 2X15 Cabs with JBL-D140 speakers. The asking price was around $150,000. Unfortunately, the posting has since been removed and we couldn’t find any additional info about it. In our research, we haven’t come across a photo of Jimi actually using these amps; he mostly seemed to […]

According to Phil Brown, who was the audio engineer during the session, all of the overdubs on ‘All Along the Watchtower’ were recorded on a Vox AC30 The setup for Hendrix’s electric guitar overdubs was achieved simply by placing a VOX AC30 amplifier in the studio, close to the control room window. We then placed Neumann U67s both close and distant, with an AKG C 12 A close to the […]

Jimi seemed to have been using this amp around late 1962 / early 1963. It can be seen on a photo of him performing with the King Kasuals. Based on the fact that this is the only time he was seen using the amp, we suspect that it was likely borrowed. At the time of using this amp, Jimi played what is likely a 1961 Epiphone Wilshire.

According to Dave Weyer used this amp during his early days with The Jimi Hendrix Experience, and apparently later on as a preamp [Jimi Hendrix’s Wah-wah Pedal and Amp in J. Levine’s New Year’s Day Auction ] To which extent the amp was used is unfortunately unknown, but it is likely that it didn’t play a major role in Jimi sound. The story of how the amp was discovered is […]