If we’re to rank guitars in order of their usage during the some of the most iconic performances of Jimi’s, this black Stratocaster would probably be way up there at least in the top three. It was first used (to our knowledge, not necessarily correct) at the Monterey Pop Festival on June 18, 1967. During this gig, Hendrix played the guitar on ‘Killing Floor’, ‘Foxy Lady’, Dylan’s ‘Like A Rolling Stone’, ‘Rock Me Baby’, ‘Hey Joe’, ‘Can You See Me’, and ‘The Wind Cries Mary’. At the end of the concert, he switched to a red Stratocaster painted by himself, and then set that guitar on fire while playing a cover of The Troggs’ ‘Wild Thing’.

Hendrix with the black Strat at the Monterey Pop Festival. Source: Youtube Screencap

What’s interesting in particular about this black Stratocaster is that it has some really unique details to it. For instance, the logo is definitely something from the transition era, but the placement of it is rather unusual. As you might know, in early 1965 Fender changed ownership and some design changes were introduced to their guitars. One of them is the design of the logo itself, which changed to a much thicker font with gold letters and black outline – easily distinguishable from the old version.

The second major change was the shape of the headstock, but this didn’t happen until late 1965. In the period between mid-1964 and late 1965 (known as the transition period), the specs on Fender models were somewhat inconstant. Jimi’s black Stratocaster, for instance, has a small headstock, but (at that time) the new style logo.

However, the placement of the logo on Jimi’s guitar is much closer to the end of the headstock, and lower in comparison to the string guide than what can be seen on other guitars from this period. An explanation for this might simply be Fender’s inconsistency. For example, see this vintage Fender Stratocaster neck from 1965 on Reverb.com made in May that year, and compare it to this 1965 Fender Stratocaster CAR made two months later in June (both link now dead, searching for others). The position of the logo is slightly different.

Even so, both of those guitars have the four patent numbers below the logo, while Jimi’s guitar doesn’t (we’re working on getting some photos that we can post right here, in the meantime, you can Google them). This could be due to them rubbing off over the span of five decades, or perhaps there’s something more to this story (a replacement neck?).

Based on photos available, most notably, Hendrix used this guitar at Fillmore West on June 25th and at Whisky A Go Go on July 2nd. From then on, it was probably used during the Monkees tour, but due to lack of photos, it’s hard to say to what extent.

In 2012, Jimi’s black Strat appeared on auction via Fame Bureau auctioneers (photos can be seen at Jimi Hendrix owned & played guitar – Liveauctoneers). According to the official info, the Strat was given to Jimi’s record company Anim Limited at some point, where it fell into the hands of James ‘Tappy’ Wright (Hendrix road manager). The guitar remained in Tappy’s hands until 2012. 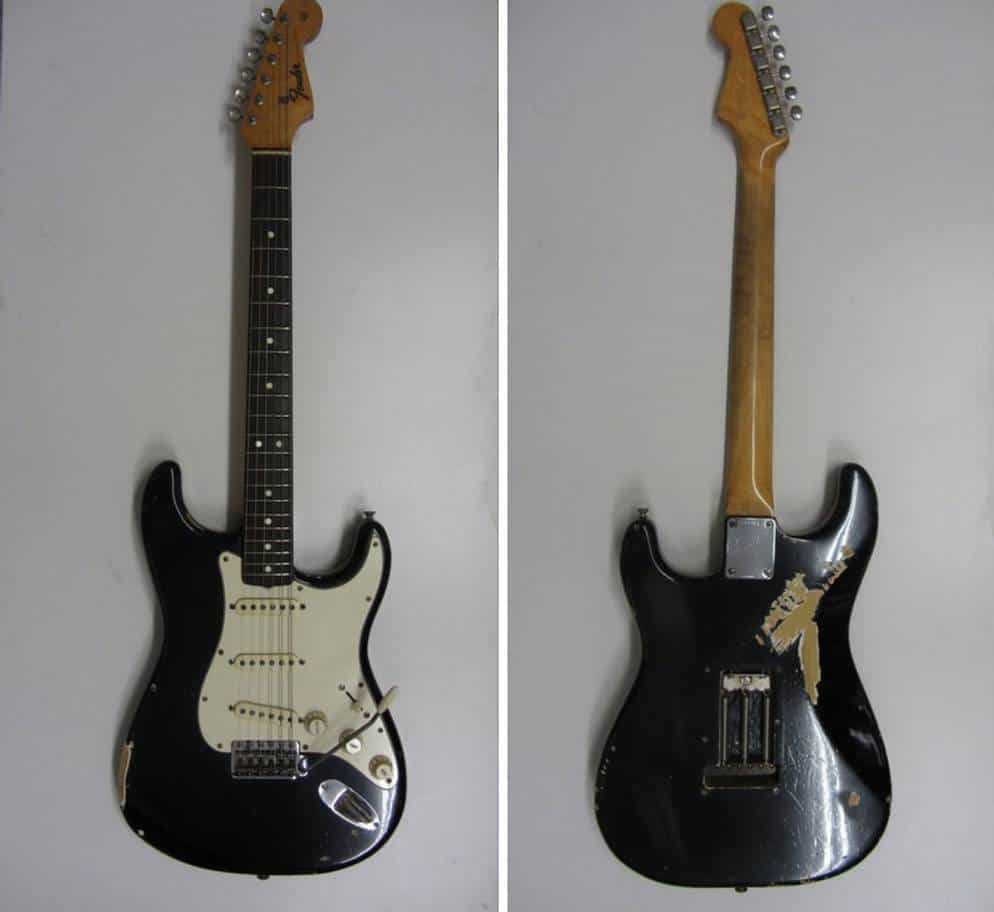 We are working on getting our hands on a copy of James “Tappy” Wright’s book “Rock Roadie”, since there’s likely to be at least some mention of the guitar in there. If you by any chance happen to already own a copy, and wouldn’t mind citing a couple of sentences for us, shoot us an email.

This guitar is often referred to as one of Jimi’s favorites. Based on what is known about the guitar, how long it was used, and how long it took for it to get replaced with another guitar, this seems unlikely.

By July 1967 Jimi was already using a different white Stratocaster over the black one, and given how often these changes happened (moving from one guitar to another), it is even unlikely that Jimi had a favorite guitar at that time. Perhaps he preferred using one guitar over the other, but having a clear favorite, something he would treasure is very unlikely.

Even the assumption that he switched from the black Strat before setting fire to the red one at the Monterey doesn’t make much sense. The Monterey Strat was likely painted for that purpose to begin with – same story as the Seville Strat that he destroyed shortly before Monterey. Even if he didn’t plan on setting it on fire beforehand, he most likely planned on at least destroying it.

According to what’s commonly accepted as a true story, he decided upon setting the red Strat on fire only after seeing The Who destroy their equipment. Since simply destroying your guitar on stage was old news at Monterey, setting it on fire would certainly make a bigger of a spectacle.

Dumb thought here, but there’s a couple inconsistent things with this guitar and Jimi. It’s worn in all the spots a right hand player would wear it, please note the belt rash and the elbow rub through. There’s no pick wear above the pickguard, where his others are worn through. It’s strung like a lefty, but that would worry me as a buyer combined with the lack of labels below the Fender label. See the below photo for further evidence…

Yes, I’d agree on the inconsistencies. I guess they could be explained if someone else, someone right-handed, played the guitar after Jimi – however, I’m not aware if Tappy ever said something about that specifically. But based on the wear, I’d just have to guess that has to be the case, and that the strings were installed upside down just for the purpose of the auction.

go back to the Jimi Hendrix gear list
wpDiscuz