This guitar is not all that significant at least when compared to some of the others, but it is nonetheless one of the more interesting ones. Jimi used it for a very brief period of time, most likely not much longer than a month.

The most interesting thing about this guitar is certainly the color. From the photos, the finish seems closest to what Fender used to call ‘Blue Ice metallic’. This was a custom finish used on the models made between 1960 and 1969. [Fender Custom Colors: Color Confusion – GuitarHQ] All of the Fender’s custom finishes, of course, originated from the popular car finishes from back in the day.

Fate of the blue Strat

As can be seen in the photos taken in Salt Lake City on August 30, 1968 (check comments below), Jimi smashed the guitar at some point in the concert. The headstock was pretty much split in half, and a crack formed across the whole body – likely rendering the guitar unusable and unfixable.

But, according to the photographer James Davenport, who was at Jimi’s concert at the Municipal Auditorium, Shreveport on July 31, 1968, the guitar was stolen from Jimi a few days after the gig, together with a black Les Paul.

He had the [Fender] guitar a total of three or four days before it was stolen.

Jimi did indeed own a black Les Paul around this time, so the story could very well be true. However, that means that if the blue Strat was stolen, it had to have been returned to Jimi relatively quickly since it was seen at a later date. (there’s doesn’t appear to be much info about this theft out there, so if you happen to know any specific details, please leave a comment below. )

So…what about this article, then, regarding its being lost right after the Shreveport show?

I wasn’t aware of this story. Thanks for sending it – I will update the page. Cheers!

Edit; As far as it being smashed, I’ll have to go back and look at the photos again. It is possible that I misidentified it.

Edit2: Yeah, It could be that Salt Lake City was a different guitar – but I don’t know. Below is a photo of the aftermath, and although the photos are black and white, it’s clearly a dark colored guitar. I’m inclined to believe that this was the blue Strat. 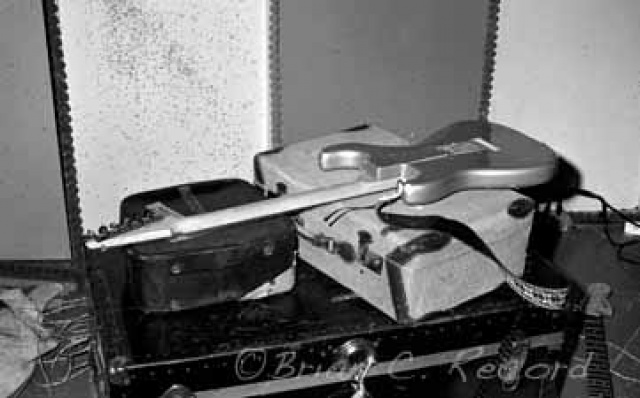 Thanks Chad, I will fix the dates.

My pleasure. Thank you so much for this article. Wished there were more detailed info on this particular Strat. I love the Ice Blue Metallic color so much. I’m in the process of getting the pieces to build a clone. I have a lot of pics with Jimi and this guitar. I’ll add one from Salt Lake showing the busted headstock. Email me and I’ll share all the pics I have.

So, I officially think he had (at least) two blue Strats, y’all. The pictures (#1, #2, #3) from the Shreveport show I’ve collected (for an art project that started this whole research rabbit hole) simply do NOT appear to be ice blue… they look a lot more like the “Lake Placid” blue. This makes sense in relation to the Davenport story (though I think they got the make of the car incorrect): Davenport noted that the blue guitar that was featured in his photo* was a custom guitar made to have a color similar to a “Chevelle” Hendrix owned. Most likely, this was actually a CHEVrolet Corvette (mistake possibly made due to the fact that the car was simply listed as CHEV on a fuzzy image of the registration that surfaced). According to Mitch, Hendrix’s first car that he ever purchased was a 1969 Chevrolet Corvette Stingray coupe in LeMans Metallic Blue (verified by the VIN and license plate from the registration noted previously). Supposedly, Hendrix very shortly thereafter totaled this car, and his crew was shocked he survived the accident–that would be a good reason to want to memorialize a car by having a guitar painted the same color, I think. As for Davenport’s story (and likely errors): Jimi was only ever known to own Corvettes, BUT the color description… “Biscayne blue”. That’s a lot more specific than “ice blue”, and, again, the same color as the guitar listed here. Further, if you look up a Biscayne from around that time… that’s not ice blue, either. LeMans metallic blue sure is similar to “lake placid” blue… which is also similar to “Biscayne blue”…. which is a lot more similar to the blue featured on the Strat in pictures of Jimi in Shreveport.

Also, there are a few places speculating (shame the images are broken) about Hendrix’s having owned a lake placid blue Strat… including this post in which the guitar’s owner relayed that the lake placid blue Strat was drummed up as a backup for Jimi’s gear which was stuck in customs while in Milan and given to the Italian singer, Mia Martini at the end of the Milan show since his gear was ultimately released. The Milan show was before Shreveport, so it couldn’t have been the same guitar, but if you don’t buy the car story, perhaps he simply liked the color of the one he had in Milan so he had another made like it later? Regardless, I think there might indeed be a “lake placid” (or “Biscayne”) blue guitar in the mix…maybe even two.

I’m thinking, too… why would Experience Hendrix reach out to Davenport and BUY the reproduction rights to these images of his and tell him that story if it were not true to some extent? They even used the pictures on a 2017 tour bus (source and better image) and on a compilation album cover (Valleys of Neptune). And Dunlop used his photos almost solely as the inspiration for their Shreveport Strap ….. which is beautiful–I just bought it. In fact, “That strap started this crap,” as I told my roommate when describing this whole ordeal… I just wanted to get him a guitar strap, he’s influenced heavily by Hendrix, and we live in Monroe (1.5 hours outside of Shreveport)…. it seemed like a perfect fit. I wanted to create and print a collage of pictures featuring Hendrix using the strap in Shreveport because I assumed he wouldn’t believe me, and, well, there aren’t many pictures of him there, so I had to do a lot of digging. Somehow I ended up here. Later, I made the connections…and here i am, after having already given the gift. I wasn’t able to stop thinking about all of this without sharing all of the information I found in my rabbit hole dive, so forgive the long post, and I hope it somehow helps in sorting out the Hendrix gear! Maybe I can sleep now, cheers!

Thanks for sharing Christian, I’ll have to sit down over the weekend and go through all this. Will report back when I’m done.

I had a ’64 Lake Placid Blue strat and currenly own in my possession a ’67 Ice Metallic Blue Stratocaster.
Looking at the picture I found,
It was definitely a Ice blue metallic Jimi was playing.

That Blue Ice Metallic Strat was the only blue Strat that he played live. It just looks like different shades under different lighting
While the headstock was split at the end of Salt Lake City show the guitar was still playable and it can be seen being played a week later in Seattle, and is seen again a week after that backstage at Hollywood Bowl. So we see it being used a total of 3 1/2 months