This guitar was first used Reading Festival in Reading, England, UK, on August 30, 1992. Kurt started off the set with his 1965 Fender Jaguar but switched to this Stratocaster at around 30-minute mark, and played it for most of the gig, aside from a few songs on which he used another black colored Strat.

The guitar was most likely brand new since it was the first sunburst Strat that Kurt ever used, and the only modification that he had done to it seems to be the added Seymour Duncan Hot Rails pickup in the bridge position.

At the end of the Reading Festival set, one can clearly see Kurt walking out to the crowd and giving this sunburst Stratocaster to the audience in the front row. Based on this, this was the end of this guitar, and Kurt, for obvious reasons, didn’t get to use it again.

However, there’s a problem with this, because there’s another guitar that for some reason many refer to as the Reading Strat. This guitar, which was, by the way, a part of the famous Nirvana exhibit hosted at the EMP/MoPoP museum in Seattle (see video below), was allegedly used during Reading and was later destroyed on November 26, 1993, at Morocco Shrine Auditorium in Jacksonville, Florida Morocco Shrine Auditorium.

So either the guitar was recovered by the security near the front line of the crowd and given back to Kurt, or there’s something fishy with this second sunburst Strat that was seen at the EMP/MoPoP. If you happen to come across a piece of information that would solve this puzzle please be sure to leave a comment below.

Pretty Sure Security took the guitar from the crowd (as the filming was over) and gave the guitar back to Kurts guitar techs (Earnie Bailey or Big John Duncan), Besides using this Sunburst Stratocaster here at the 08/30/92 Reading Festival, Kurt also used this Sunburst Stratocaster on “Endless Nameless” at the 04/09/93 Cow Palace (Trenjevka Rape Victim Benefit) Daly City, CA and then later on used and smashed 11/26/93 Morocco Shrine Auditorium in Jacksonville, Florida.

It would certainly make things much more simpler – I just don’t know how to confirm it though. I would guess that MoPoP talked to somebody who would know story behind the guitar, but none of that is public. Also, there’s no photos from Morocco Shrine, so we don’t know if this was that exact guitar. I’ve read that a kid climbed on stage, and that him and Kurt destroyed the guitar together, but that’s about it.

I actually have the guitar. The busted one is the fake!

Would love to see some photos: danko@groundguitar.com

No i have the guitar in my room

Alvin, that’s just Univox on the thumbnail. If you play the video, you’ll see the alleged Strat.

Also he smash it it at Jackson villa Florida

Oops sorry I forgot you put it on there

You Should rename this in (Bloodcaster), Kurt had been playing so hard and then he leave his blood on guitar. https://www.youtube.com/watch?v=R3XIGon2RjY
it’s defently in 0:50 sec. 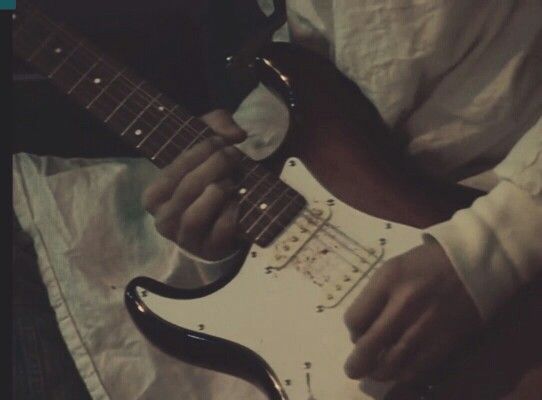