Kurt Cobain was photographed sitting on stage next to this guitar backstage at the Mecca Auditorium in Milwaukee on October 26, 1993 (photos taken by Kevin Mazur – see source below).

He was just sitting there, having a moment, and I started taking pictures, He looked at me and said, ‘You know what? Not now. Sorry.’ I left him alone after this.

Based on the photos, the guitar was right-handed and even strung for right-hand use. Therefore, there a low chance Kurt had anything to do with it. Most definitely, this Mustang actually belonged to Steve Turner’s from Mudhoney, who opened the show that night.

And, just to clear the waters for people who may have come here following a different story – yes, there is an identical looking guitar that can be seen hanging on a wall at the Hard Rock Cafe in Oslo. Allegedly, that guitar was sold to HRC by Courtney, and based on the photos, there’s Kurt’s autograph on it. Although the two guitars do look identical, there very little chance they have anything in common. Also, there’s low chance that that HRC guitar ever touched Kurt’s hands.

Just to let you know the Right-Handed Fender Competition Blue Mustang Kurt was sitting next to at the 10/26/93 Mecca Auditorium, Milwaukee, WI Show that was “Steve Turner” from Mudhoney guitar (as Mudhoney was one of the opening bands on that show) the only Competition Blue Mustang Cobain ever owned was the 1969 Lake Placid Blue Competition Model Mustang With the Matching Headstock, (Used in the “Smells Like Teen Spirit” music video). 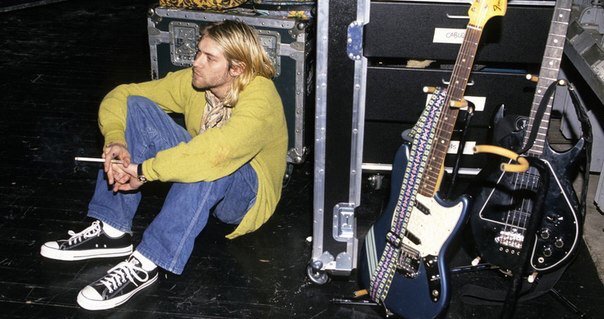 Where did the photo of this guitar come from?