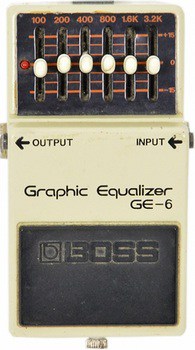 Rory used an EQ pedal to get more mid-range from his amps. As far as the exact model, on Rory’s official website there are photos of the Boss GE-6. Since this pedal was produced from around 1978, it could be that Rory used it for the majority of his career.

I’ve also got a couple of Boss effects which I think are very good, a chorus, flanger, overdrive and a graphic which beefs up the mid range on the Marshall. Boss are the best effects around I think

However, in a later interview, Rory states that he uses an old green Boss EQ. He was probably referring to the Boss DB-5, which was a sort of Overdrive and EQ packed in one pedal.

So the truth is that he probably juggled between these two.