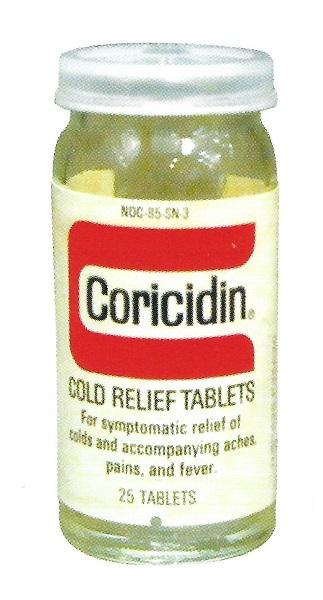 According to Galadrielle Allman [Please Be With Me, p. 103], Duane initially used a water glass to learn to play slide. At the time Duane lived in Los Angeles, sharing an apartment with Pete Carr on Yucca Street. [Johnny Sandlin: Anathalee G. Sandlin, A Never-Ending Groove, p. 56.]

According to Johnny D. Wyker, he settled on using a Coricidin bottle around the time he lived in Muscle Shoals, circa late 1968.

I went to several drug stores with Duane in The Shoals and we’d ask the pharmacist if Duane could look through his empty bottles and we’d sit on the floor and dig through the boxes and Duane would try out different bottles as a slide. He finally settled on the Coricidan(sp) bottle.

Duane used medicine bottles sold by Schering Corporation with Coricidin or Coricidin D tablets. There were bottles with 12 and with 25 tablets available back then. He preferably used the 25-tablet versions since they are tall enough to cover all the strings. When Schering Corporation merged with Plough, Inc. in 1971, the bottles later became childproof. Duane used the original non-childproof versions, of course.

As an interesting story – at the Atlanta Pop Festival, Duane had forgotten to bring his Coricidin bottle so they broke a wine bottle and Duane used the bottle’s neck as a slide (video below) [Galadrielle Allman, Please Be With Me, pp. 246 – 248].

Gregg’s version of the story

According to Duane’s brother, Gregg Allman, Duane received his first Coricidin bottle from him. As the story goes – it was Duane’s birthday and he had a cold and had also bruised his arm because he had fallen off a horse, Gregg gave him a bottle of Coricidin and a copy of the debut record of Taj Mahal, and Duane started playing slide on a Telecaster of which the neck was broken.

However, there are some issues with this story. On Duane’s birthday in 1967, Taj Mahal record had not been released yet. On Duane’s birthday in 1968, Duane either lived in Muscle Shoals, but more likely in Jacksonville at Berry Oakley’s house going back and forth to Muscle Shoals and Jacksonville. Either way, he did not live in Los Angeles at the time. And whats more, the Hour Glass days were over and we do know that he learned to play slide in Los Angeles while being in Hour Glass, as Hour Glass played Statesboro Blues live on stage way before his 22nd birthday – which would be the next option.

If you watch Muscle Shoals, the movie, you’ll see Gregg telling exactly how it came about: before Duane left LA to go back to Muscle Shoals in late ’68, he and Gregg went for a horseback ride and Duane and the horse took a spill crossing a road, with Duane landing on his left elbow. Duane hold up for 6 weeks and wouldn’t even talk to Gregg. Gregg took him a bottle of Coricidin and the new Taj Mahal album with Jesse Ed Davis playing slide on a Telecaster and left them on Duane’s doorstep. Duane later called Gregg and told him to come over and listen to him playing slide along with Taj Mahal and Jesse Ed Davis, and Gregg said he was killing it already, using the Coricidin bottle as a slide. It happened in late ’68.

For me the question boils down to who came up with the distinctive slide (or bottleneck) intro to Statesboro Blues once the body of the song starts (in the ABB version) and right at the top on the Taj version? The ABB did the breaks that Duane played over as an intro. The melody Jessie E Davis played and Duane played are identical. Another possibility is the melody existed via a previous much earlier song from Elmore James or someone else. Sharing the same label and living in Macon right alongside the ABB, I knew firsthand that Duane had great admiration for Jessie Ed. So it wouldn’t surprise me if Duane played it as having learned it from Jessie. Further, even if so he definitely took it to another level completely expanding the boundaries of slide playing forever.