In 2012 one of Kurt Cobain’s alleged guitars appeared on Discovery Channels tv-show dubbed “Final Offer”. Investigating guitars is pretty much the theme of this website, so I thought I’d try to figure out where this guitar fits exactly, or if it even fits anywhere.

Seller describes the lot as ‘one of Kurt’s earliest guitars still in existence’, and claims that the guitar was played in 1989. Although he doesn’t say in the video clip above, on TODAY.com he reveals that the guitar was broken on stage in November 1989. He does not reveal where he actually got that information or the guitar itself.

No one in the show mentions the exact model of the guitar, so that made my job that much harder. After hours of research though I eventually did come up with a possible result – it is a Teisco Audition or at least one of the many version of it.

A Teisco Audition guitar in its original form. Photo by Robert Caple

Teisco is a factory based in Japan, and they often imported instruments to North America under several brand names – including Silvertone, Beltone, and Kingston. Also, several of their models shared designs with European products of the time such as Hagstrom. This is a very important thing to note, and here’s why:

Nirvana traveled to Europe in October 1989 and did their first gig on 10/23/89 at Riverside, Newcastle upon Tyne, United Kingdom. Kurt was seen playing his white Univox Hi-Flyer which he used on the last couple of gigs in the US and continued using it for the first couple of gigs in Europe. In November the band travels to West Germany, and Kurt is now seen playing a red Hagstrom II F-200 – which looks suspiciously similar to the guitar that was auctioned on the show. After he broke the Hagstrom in November 1989, he used another Univox for few gigs and then switched to a black Washburn Force 31 which he played for the rest of the year. In 1990 he started using Epiphone ET270, which also looks a lot like the guitar that was put for the auction.

So it looks that the seller of this guitar seems to be confusing his guitar with the red Hagstrom II which Kurt played in 1989, or even maybe with the Epiphone which came into play later. The three guitars do look somewhat similar but the differences should be relatively easy to spot. 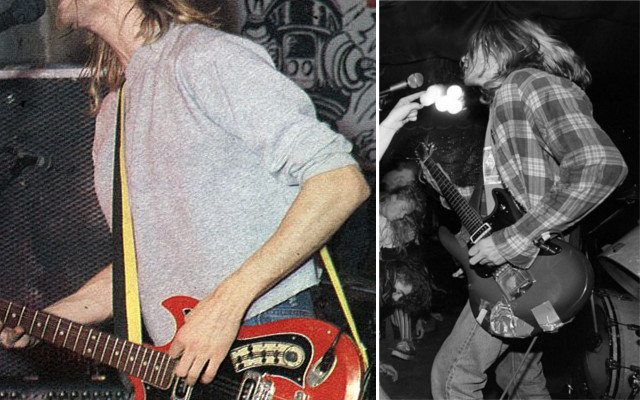 And I’m afraid that’s as far as I’ve gotten in trying to figure this out. The guitar that was sold on that show was almost certainly not played by Kurt in 1989, as there’s no photographic evidence that he ever played that guitar. I’m not saying that it’s a fake, because there were gigs played in 1989 where there were no photographers present, so I can’t really tell for sure if Kurt ever held this guitar – but if he did it was for a very brief period of time because someone out there would probably manage to snap a photo.

Be that as it may, some guy spent $10,000 on a deal that was only held by a promise from some other guy who claims to have credible sources. Hopefully, the buyer did his research and came out with positive results, but I myself can’t say so.

In case you want to investigate the topic on your own here’s some help:
– Visit www.nirvanaguide.com  – a website featuring dates and photos of all Nirvana gigs.
– Since it’s easy to confuse this guitar with some of Kurt’s other guitar, keep an eye for a chrome control plate and search for a Jaguar-style body shape and tremolo piece.
– Focus on the unique headstock shape.

If you happen to find anything please do post it in the comments below.

Stories from the Blog 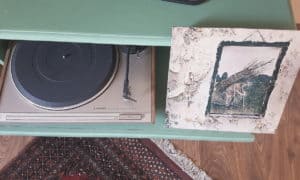 The lawsuit that argued that Led Zeppelin's mega-hit Stairway to Heaven was basically a result of Jimmy Page ripping of the chord progression from Spirit's song Taurus, finally came to…

Josh is Out, John is In – Peppers go Back to the Old Formula

As a surprise to pretty much everyone aside from the band members themselves, Flea recently announced on his Instagram account that the Red Hot Chili Peppers are about to make… 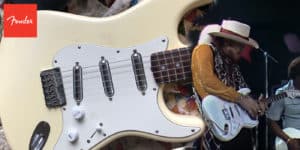 As part of me encouraging people to point out my mistakes and share their own stories over at GroundGuitar's Gear Page, on lucky occasions, I get contacted by people who… 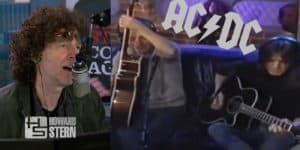 AC/DC is one of the few bands that just avoid doing any sort of an Unplugged version of their songs. An AC/DC song pretty much always sounds exactly like it… 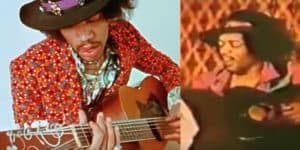 Jimi Hendrix is someone who, for one reason or another, we didn't often see playing acoustic guitars. Obviously, the late 60s were all about electrics, and there were usually no…

Distortion pedals are a tricky subject for a few reasons. First, distortion as an effect is a spectrum, and there's no clear definition of what's the right 'amount' of distortion.… 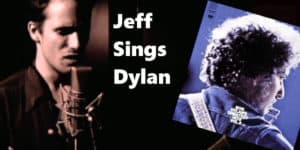 YouTube can be an amazing place sometimes. One can occasionally stumble upon an unexpected treasure - amazing talent exhibited by people both known and unknown. One such treasure I stumbled… 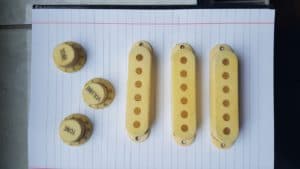 How to Clean Vinyl Records with Wood Glue (With Images)

Recently I got into the habit of cleaning every single vinyl record that I buy with a simple trick - wood glue. I often by records on the local flea… 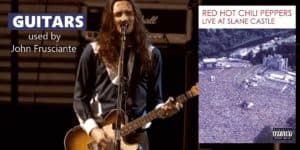 Given that Live at Slane Castle by the Red Hot Chili Peppers is one of the most iconic modern Rock concerts recorded on film, probably a lot of young guitarists…

View All on Blog
wpDiscuz