Jeffrey John “Jeff” Hanneman (also known as „The Riff Fuhrer“, January 31, 1964 – May 2, 2013) was an American musician and songwriter, best known as a guitarist of the American thrash metal band Slayer. Slayer was born in Huntington Park, California, in 1981 when Kerry King approached Jeff with a proposition to start a band after seen him playing the guitar. The quartet made a breakthrough with their 1986’s album Reign in Blood, which is considered as one of the heaviest and most influential thrash metal albums of all time. He spent 30 years in Slayer, during which Jeff shaped his recognizable and uncompromising riffs and guitar sound.

Jeff was an active member of the band and continued performing until January 2011 when he was bitten on his right arm by an insect that was carrying a flesh-eating disease called necrotizing fasciitis. Due to an arm infection, he was unable to play the guitar and perform again with Slayer. His last performance with Slayer was at the Big Four in Indio, California on April 23, 2011. That night, Gary Holt (Exodus) performed most of Slayer’s set, and then handed it over to Hanneman for the encore on two final songs: “Angel of Death” and “South of Heaven.”

Unfortunately, the world lost Jeff Hanneman on May 2, 2013. He died in the hospital in Los Angeles of alcohol-related cirrhosis of the liver, which was a consequence of abusive alcohol drinking through the years. He was 49 years old. Jeff touched the hearts of many people with the music he composed, and his creative guitar work made a huge influence on heavy metal music and the new generation of metal musicians.

One of his two most favorite guitars (another one is his Jackson Punk Rock) and his first guitar ever. Jeff used it on ‘Show No Mercy‘ and ‘Hell Awaits‘ albums.

(when asked what was his first guitar:) A Les Paul. I can’t remember how old I was. I got a job and saved my money until I had $500. Two months after that, I met Kerry [King], and that’s how Slayer got started. I worked in an office building at the time, and this other band practiced in one of the rooms. After work, I’d go hang out with those guys and play, just to learn the instrument. Kerry was actually trying out for that band, but we were more in tune with one another, musically speaking, so we decided to start a group. He also played with Tom [Araya] in another band, and he knew a drummer that lived on his block. So it all just fell together. [From the Archive: Guitarist Jeff Hanneman Discusses Gear and Slayer’s Beginnings]

Jeff made changes to his Les Paul, he installed a Kahler tremolo system and changed the bridge pickup. He also wanted to have a more recognizable guitar, so he paint-splattered the guitar with a red paint and screw chains on it, to give it “more personality” and recognition.

I put a Seymour Duncan pickup in the bridge position—I can’t remember which on but it may have been a Distortion,” Hanneman continues. “I had a Kahler tremolo put on her, too. Actually, the guy who put it in for me was the first guitarist in Megadeth, Chris Poland. I think he did it for 50 bucks! To do the paint job I taped up the pickups, dipped a stick in some red paint and just splashed it on there. I think I screwed some chains on her for a while, too. 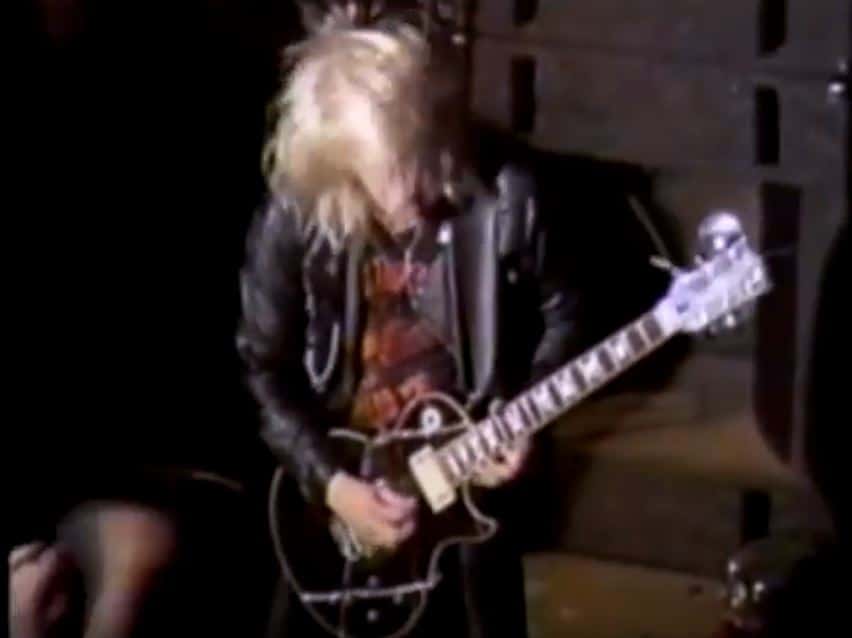 There is not much information about this guitar, except for a few photos of Jeff playing it. The photos all seem to date back to the early days of Slayer, when the band played mainly covers. Going from this, it is likely that this guitar wasn’t used on any of Slayer’s own material

From the photos, we can conclude that Jeff’s Explorer was a limited edition model. It had two original Gibson ‘Tar back’ humbucker pickups, mahogany neck and body, and a rosewood fretboard with 22 frets and dot inlays.

Sometime around 1985, Jeff begin playing a black B.C. Rich Bich. Again, like with his Gibson Les Paul, he applied the same formula – he changed the original bridge and original pickups with a Kahler Pro bridge and DiMarzio Super Distortion humbuckers. He then went on to use the guitar during the ‘Hell Awaits Tour’ (1985), and for the recording of legendary ‘Reign In Blood‘ album, as well as for the subsequential tour (1986–1987).

The original guitar was all black with chrome hardware, which can be seen on various concert bootlegs and photos. Later on, Jeff applied various white decal stickers on it, which in the future became the basis for many of his custom guitars. He had stickers of Smirnoff vodka, St. Pauli Grill, and D.R.I. logos, the logo of the band Wasted Youth and their “f**k authority” moto, as well as their ‘Reagan’s In’ album cover, a skull, and Johnny Rotten “Who are these punks?” stickers.

This guitar shares the same spec as Jeff’s “B.C. Rich Bich – 3×3 headstock” (mentioned above), only with black hardware and a pointed headstock. Also, Jeff never applied any stickers to this particular guitar. 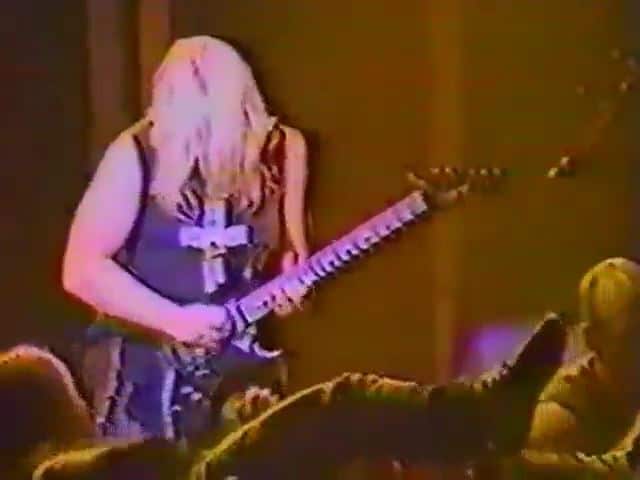 Jeff started using this custom made B.C. Rich Gunslinger in 1987. Aside from the usual Kahler bridge that was fitted on all his guitars up until this one, the Gunslinger was the first guitar to feature two active EMG 81 humbuckers.

This was also the second guitar on which Jeff applied decal stickers. Among others, the guitar had a sticker reading ‘Reinhard Heydrich’ – a person who was a high-ranking German Nazi official during World War II, as well as ‘Prinz Eugen’ (German cruiser used during WWII), Florian Geyer (German nobleman who lived in the 15th century), and some other WWII themed sticker such as Wiking, Totenkopf, Das Reich, and Deutschland.

The choice of the stickers, of course, led to a controversy, and people have suspected that Jeff was a Nazi sympathizer. Jeff denied these accusations and explained that he was simply fascinated by evil imagery and insisted he didn’t endorse white power and wasn’t anti-Semitic.

This was Jeff’s second favorite guitar, and probably the most famous one. He bought it in 1988 for around $2,000 (it being the most expensive guitar he purchased until that time) and used it until around 2001 – mostly just for E-flat tunings.

Specs are fairly typical for that era of Jackson custom shops with a few exceptions – neck-thru Poplar body with a maple neck with 24 frets and ebony fretboard with sharkfin inlays, and a Kahler Flatmount Tremolo. The guitar was originally shipped with passive Jackson pickups (probably a J-50 and a J-80) and a JE-1200 mid-boost circuit, but the pickups were soon changed to EMG 81s, and the mid-boost circuit was removed. Also, the Jackson originally had a Corian nut and a behind-the-nut Kahler string lock, which was changed to a Floyd-rose style locking nut in the 1990s.

This Jackson was unfortunately ruined during the making of the “Bloodline” video when they dumped fake blood on it.

Note: All the guitars that Jeff used from this point on would essentially have the same setup: EMG pickups and Kahler Flatmount Tremolo (model 2315) with a Floyd-rose locking nut, and a 24 fret neck. The only thing that will change will be stickers, body paint jobs, and fret inlays.

This is the first signature guitar ESP made for Jeff in 1990. This guitar can be seen on Live Intrusion and War at the Warfield DVDs. As said, the guitar shares most of its specs with the above mentioned Jackson Soloist. The only significant difference between the two guitars were the stickers, which on the ESP read: Raiders, Oakland Raiders, Johnny got his gun Dalton Trumbo’s, Las’s Wasted Youth, Fuck Authority, Regan’s In, D.R.I.

ESP Kill (Bloodline) is one of the earlier signature models that ESP made for the Jeff, and it’s also the only ESP guitar with a reverse headstock that Hanneman had ever used. It was made in 1998 and was used during the Diablos In Musica studio sessions, as well in Bloodline video (it got its nickname from there) and War at the Warfield DVD. It shared the specs with Jeff’s other guitars – meaning EMG pickups with Kahler Tremolo System (model 2315), rosewood fretboard with 24 frets. The inlays in the neck are themed after the Hitlerjugend insignia.

Specifications and hardware on this guitar are the same as on the previous ones. The only difference is the paint job, which was themed after a winter camouflage pattern.

Jeff can be seen using this guitar during the Still Reigning DVD concert.

This guitar had a Flecktarn camouflage paint job on the body, which is a German military camouflage pattern designed in 1976. The lower fret inlays were based on Totenkopf  (i.e. dead’s head, a German word for the skull and crossbones), and the higher frets had sig runes – which Jeff often incorporated into the design of his guitars.

This guitar is basically the same as the ESP Urban “Flecktarn” Camo, only with different body paint – digital camo instead of Flecktarn camouflage.

As a gigantic and longtime fan of Oakland Raiders, Jeff, of course, had to make a Raiders-themed guitar. The guitar featured the usual black finish with white Raiders name and a skull with 2 crossed daggers.

Hanneman used it in the studio during the recording of Slayer’s ‘Christ Illusion‘ album.

This guitar was handmade by the luthiers at the ESP Custom Shop in Tokio, personally for Jeff. Heineken was Hanneman’s favorite beer and drink of choice, so for that reason, he decided the make a guitar themed after it. The final design featured a huge Heineken logo on the top of the body reading ‘Hanneman’ instead of ‘Heineken’, and a blood star design (taken from the logo) was used on the inlays. 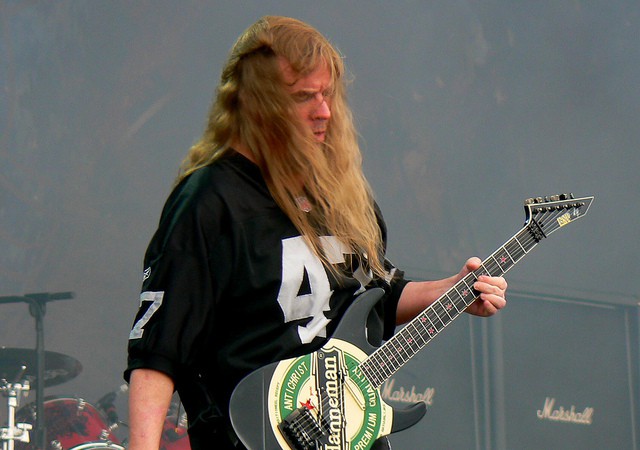 If you’re interested in seeing the guitar in action, check out The Big Four: Live from Sofia, Bulgaria DVD, featuring performances by Metallica, Slayer, Megadeth, and Anthrax – the “big four” of thrash metal.

Also made at the ESP Custom Shop in Tokio. The guitar had a Heineken logo and a “Totenkopf” graphic below it on the body, and “Blood Star” inlays on the fretboard. The interesting thing about this guitar is that Hanneman used it in his last performance with Slayer on stage, at the Big Four in Indio, California on April 23, 2011. That night Hanneman performed the encore with the rest of the band when they played “Angel of Death” and “South of Heaven”. This was also the last time original Slayer lineup played together. 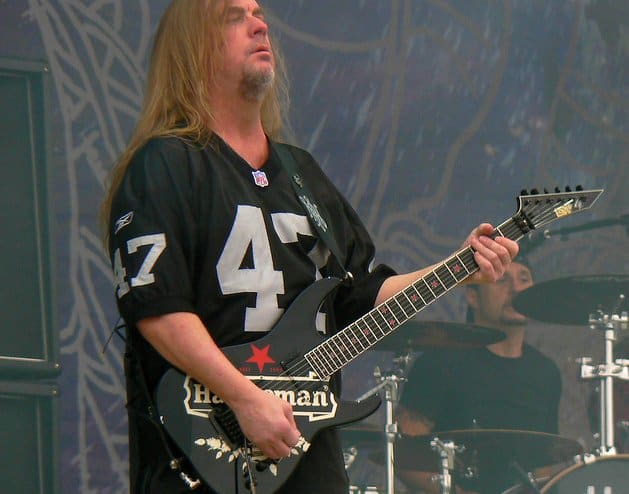