Jeffery Beck was born in Wallington, Surrey, England on June 24, 1944. He showed interest for music at a very young age, and he was a part of a church choir and took piano lessons for 2 years. His interest in string instruments came after his uncle showed him how to play an upright bass and the violin. His encounter with an electric guitar was when he went to a Buddy Holly concert at Croydon School in the spring of 1958. This inspired him to get his first guitar which was an acoustic, and which he borrowed from a friend – who never asked it back. He also made an attempt of building his own guitar, but never really succeeded.

Jeff joined his first band “the Rumbles” in 1963, with whom he played mostly Gene Vincent and Buddy Holly songs, and he got his first gig as a session guitarist in 1964 on a single by the Fitz and Startz titled “I’m Not Running Away”. His breakthrough came in 1965 when he replaced Eric Clapton in the Yardbirds on the recommendation of his childhood friend Jimmy Page, who also joined the band shortly after.

Jeff left the Yardbirds 20 months later, and started doing his own stuff. He recorded a couple of singles, and formed his own band called “the Jeff Beck Group”, whose members among others were Shadow Jet Harris, Rod Stewart, Ronnie Wood, Nicky Hopkins and Micky Waller.

From then on Jeff mostly went by himself, but he also appeared on great ton of albums by musicians such as Mick Jagger, Tina Turner, Jon Bon Jovi, Roger Waters, Donovan, Stevie Wonder, and many other. He was even approached by Rolling Stones to join the band following the death of Brian Jones, and he the members of Pink Floyd intended to ask him to join as a replacement for Syd Barrett, but as they said, “None of us had the nerve to ask him.”

Today Jeff is considered to by one of the most influential guitarists of all time, and he was placed as number 5 in Rolling Stone’s list of the “100 Greatest Guitarists of All Time”.
Jeff is also a lover of Hot Rod cars, of which he owns quite a collection. He does not only drive and own them, but works on the mechanical stuff himself. 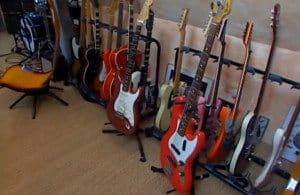 Part of Jeff Beck’s guitar collection at his home studio.

Jeff usually prefers using a low wattage amp, not only in the studio, but on stage as well.

He’s known to be using a lot of different stuff, depending on the style of music he’s playing, so it’s hard to gather up all the information. Bellow is the list of amps that we could find, and they are mostly listed in a chronological order. Please excuse us for not writing a detailed list, but we’ll add more stuff down the line. If you are knowledgeable of the subject, be sure to send us a message.

– Vox AC30
Jeff used two of these with the Yardbrids – at the time he was playing the Esquire. They were linked in series and placed on chairs so they were at the waist level, where Jeff could get to the controls easier and hear the sound better.

– Marshall JTM45 Plexi
Used mostly during the post Yardbirds era, probanly the amp he’s best known for.
During early 2000s Jeff decided to go back this original sound, so he started again using the JTM45, which is more clean sounding amp than the DSL- his second best known amp. This does not mean that Jeff now uses one or the other exclusively – he often switches between them depending on the kind of stuff he wants to play.

– Fender Twin Reverb Reissue
Used during the tour with Stevie Ray Vaughan in 1989.

– Fender Pro Junior
Used on Rock ‘n’ Roll Party tour; he had with two of them on-stage, one in black one and another one in blue – perhaps as a tribute to Blue Caps – which has a Jensen P10R Alnico I speaker.

– Lazy J 20
This amp is based on a tweed Deluxe, and it’s built by Jesse Hoff. These were mostly used for “Crazy Legs” tour.

– Fender Super Sonic
Seen on stage in the late 2000s. He used two heads, each one connected to a separate cabinet.

– Magnatone Varsity
Seen on stage when Jeff played with ZZ Top in 2014.

– Colorsound Overdriver
An old pedal. Jeff demonstrated it in an interview recorded in 1964.

-Maestro Ring Modulator
Given to Jeff by Jan Hammer, who used to use it himself

– Klon Centaur
Uses it to get some more boost, and dirtier sound from his JTM45

Back in the day Jeff would use very light strings on his Les Paul, because as he said – he has very “weak flesh” on tips of his fingers.